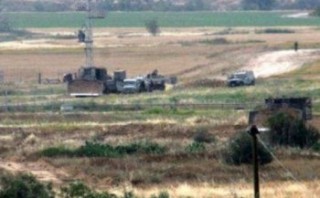 Media sources said the Israeli tanks, and armored bulldozers, came from a military base, across the border fence near al-Farahin area, and invaded the lands before leveling and bulldozing various sections, close to fence.

The soldiers also fired at least eleven missiles overnight, into Palestinian lands, east of the Zeitoun neighborhood, southeast of Gaza city, causing damage to the lands, and several nearby homes.

In addition, the army fired missiles into an area, east of the Sheja’eyya neighborhood, east of Gaza city, wounding at least one Palestinian.

The Israeli army claimed it targeted sites run by the Al-Qassam Brigades, the armed wing of Hamas, after a roadside bomb exploded near the border fence in northern Gaza.

It is worth mentioning that the Israeli army carries out daily invasions into border areas, in the besieged Gaza Strip, in addition to attacking fishermen and their boats, in Palestinian territorial waters.

In related news, Israeli navy ships attacked many Palestinian fishing boats in Beit Lahia, in the northern part of the Gaza Strip, and fired many live rounds in addition to using water cannons against them.