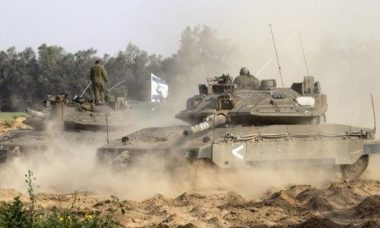 Several Israeli army vehicles, and armored bulldozers, invaded, Wednesday, Palestinian agricultural lands, east of Khan Younis, in the southern part of the Gaza Strip, and bulldozed them, while war jets hovered over various areas on the besieged coastal region.

It added that the soldiers uprooted and bulldozed sections of the invaded lands, especially close to the border fence, in addition to installing sand hills, while military drones flew overhead, and over several areas of the Gaza Strip.

The invasion is part of frequent violations, and invasions into Palestinian lands, in border areas in the northern and eastern parts of the Gaza Strip.

Earlier Wednesday, the soldiers fired live rounds and shells into Rafah, in the southern part of the Gaza Strip, killing a Palestinian teen, and wounding two others.