Israeli Army Transfers Corpse Of Slain Palestinian To His Family 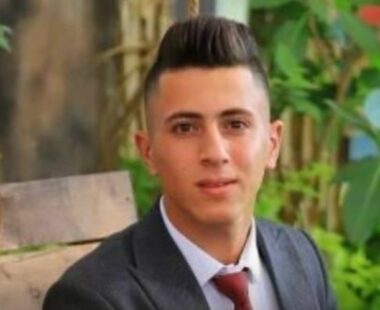 On Wednesday afternoon, the Israeli army transferred the corpse of a Palestinian, who was killed by the soldiers earlier this month, to his family in Jenin, in the northern part of the occupied West Bank.

Ghanem was then transferred by a Palestinian Red Crescent Ambulance to the Jenin governmental hospital before his scheduled funeral procession and ceremony.

Rafiq was killed on July 6th, 2022, when Israeli soldiers shot him and another Palestinian in Jaba’ town; medical sources said he was shot and seriously injured before the soldiers took him away without allowing Palestinian medics to approach him. The Israeli District Coordination office later contacted the Palestinian side and informed them that the young man had succumbed to his serious wounds.

Ghanem was shot near his home when the army invaded the town and fired many live rounds, gas bombs, and rubber-coated steel bullets at Palestinian protesters.

He wasn’t participating in protests when the soldiers shot him; his mother said he was wearing shorts and a tank top when he stepped out of the family home minutes before being shot.

His uncle, Hani Ghanem, is also a former political prisoner who was imprisoned by Israel for eighteen years, while his aunt, Ni’ma Ghanem, was killed by the Israeli twenty years earlier, and his grandfather was killed in the year 1948.

Hani said that Rafiq heard a sound near his home and went out to see what was going on before the undercover soldiers, standing at a distance behind him, shot him with two live rounds.

The soldiers also invaded Jenin city and the Jenin refugee camp before undercover officers, driving a car with Palestinian license plates, abducted a former political prisoner, Amid al-Isran, from the refugee camp.

The undercover officers fired a barrage of live rounds at random while withdrawing from the refugee camp and handed Amid to soldiers who forced him in a military vehicle and sped away.

Also, Mousa Khatib said the undercover officers shot his son Fadi Khatib, 20, a former political prisoner who Israel imprisoned for 18 months while standing in front of his home, causing a moderate injury to his leg.

Rafiq was the fourth Palestinian to be killed by Israeli soldiers in the West Bank in the first six days of July.