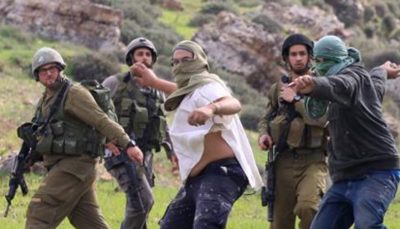 Several illegal Israeli colonists assaulted, earlier Monday, many Palestinian farmers, in their own lands, in Far’ata village, west of the northern West Bank city of Nablus, wounding two, including an elderly woman

The assailants came from nearby illegal colonies and outposts, and attacked the farmers while plowing their lands, and preparing to replant them.

Ghassan Daghlas, a Palestinian office in charge of Israeli colonies file at the Palestinian Authority in the northern part of the West Bank, said the wounded woman, identified as Marian Salman, 65, and a man, identified as Abdullah Shana’a, were injured after the assailants hurled stones at them.

Palestinian medics rushed to the scene, and provided the wounded with the needed medical treatment.

The Israeli attackers fled the scene shortly after the attack; the incident is part of repeated violations carried out by the colonists, living on illegally occupied Palestinian lands.