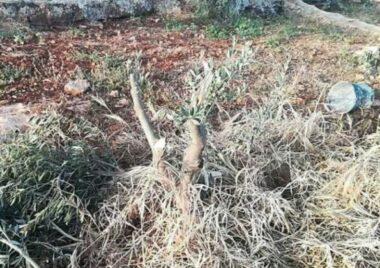 A group of illegal Israeli colonialist settlers invaded, late on Wednesday at night, Palestinian agricultural lands, before cutting dozens of recently planted trees, in addition to damaging a fence and stealing construction supplies, in Jaloud village, southeast of the northern West Bank city of Nablus.

Ghassan Daghlas, a Palestinian official who monitors Israel’s illegal colonialist activities in northern West Bank, said the colonists came from a nearby illegal outpost that was installed on private lands.

He added that the colonists invaded a land, owned by Hisham Emad Hammoud, located in Basin 6.

Daghlas stated that the colonists cut all trees which were recently planted, and spilled more than thirty cement bags on iron bars that were supposed to be used for a new construction nearby, before pouring water on them, and stole construction supplies.

A few days ago, the colonists destroyed several electricity poles and powerlines in the eastern area of Jaloud, causing substantial damage and power blackouts.

Several months ago, the colonists invaded a Palestinian orchard in Jaloud and cut more than 250 olive saplings.

On Thursday, a group of Israeli colonialist settlers, attempted to invade a Palestinian school near Tubas, in northeastern West Bank, causing anxiety attacks among the schoolchildren.