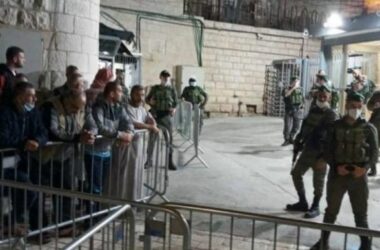 Dozens of illegal Israeli colonialist settlers invaded, late on Thursday at night and on Friday at dawn, the yards of the Ibrahimi Mosque, in the southern West Bank city of Hebron.

Eyewitnesses said the colonists were accompanied by soldiers, who were extensively deployed around the holy site and its surrounding Palestinian area.

They added that the colonists used loudspeakers to play music and were singing and dancing while the Muslims were holding prayers in the holy site and its courtyards.

It is worth mentioning that, last month, the Israeli army prevented the Sheikhs from using the speakers of the mosque to call for prayers more than 59 times, allegedly for “annoying the colonists” who live in nearby illegal colonies and outposts.

On Wednesday night, Israeli soldiers abducted a young Palestinian man in the Al-Aqsa Mosque, in addition to attacking many young men while leaving the holy site, in the occupied Palestinian capital, Jerusalem, in the West Bank.