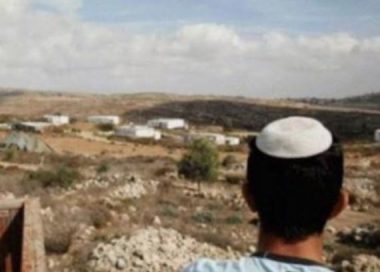 The armed colonizers invaded the lands, owned by Ed’eis family in the al-Hamra area, and installed a tent, a mobile home, and a barn for their sheep.

The new outpost was installed in twenty Dunams of Palestinian lands, only dozens of meters away from the illegal Bnie Havar colony, which was also installed on private lands.

Younis Arar, the head of the Palestinian Committee against the Annexation Wall and Colonies in Hebron, said the new outpost aims at expanding the existing illegal colony, and added that Israeli soldiers invaded the area, and declared it a closed military zone, preventing the Palestinians, not the colonizers, from entering it.

He also said that the Committee will be installing a protest tent on the land and will challenge Israel’s illegal colonialist activities in international courts.

Dozens of activists and local farmers protested in the area, and chanted against the ongoing illegal Israeli occupation, and its colonialist activities in direct violation of International Law and the Fourth Geneva Convention.

They called on the international community, and all related legal and human rights organizations, to intervene and end the Israeli escalation and the ongoing policies of illegal annexation, and theft, of Palestinian lands.