Israeli Colonists Install A Tent Of Palestinian Lands Near Hebron 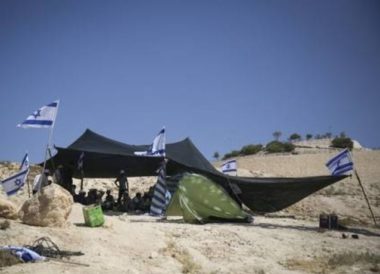 Illegal Israeli colonialist settlers installed, on Saturday evening, a big tent on Palestinian lands in the at-Tiwana village, in Masafer Yatta area, south of Hebron, in the southern part of the occupied West Bank.

Fuad al-‘Amour, a local nonviolent activist and a member of the Civil Protection Committee south of Hebron, said the colonists came from the illegal Ma’on and Havat Ma’on outposts, which were built in private Palestinian lands east of Yatta.

He added that the colonists, accompanied by many soldiers, installed the tent on the invaded lands, and stayed in them along with their families.

Al-‘Amour also stated that the colonists have recently escalated their violations against the Palestinians and their lands in that area, in an attempt to force them out and establish illegal colonialist outposts that would eventually lead to expanding existing colonies.

All of Israel’s colonies in the West Bank, including this in and around occupied East Jerusalem, are illegal under International Law, the Fourth Geneva Convention in addition to various United Nations and Security Council resolutions.

The so-called “Deal of the Century” of U.S. President Donald Trump is an official recognition of these colonies, and of Israel’s illegal colonialist occupation of Palestine, and similar to policies of the various Israeli governments, including the current led by Netanyahu, only aim at turning the West Bank into isolated ghettos, surrounded by Israeli colonies and military bases, in addition to stripping the Palestinians of basic rights, such as self-determination, independence, and sovereignty of their own homeland.