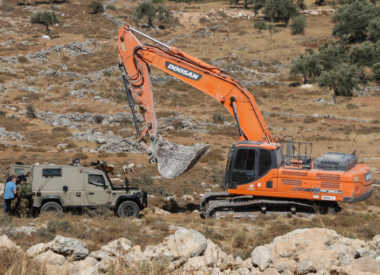 Omar Khatib, the head of Thaher al-Maleh Village Council, has reported that the colonists are from Shaked illegal colony, which was built on private Palestinian lands owned Thaher al-Maleh villagers, and added that the lands are isolated behind the illegal Israeli Annexation Wall.

Khatib added that the Israeli assailants bulldozed and uprooted 120 Dunams of Palestinian lands, and that the lands are part of 490 Dunams, which were illegally annexed by the army two years ago.

The new attack is part of the ongoing attempts to build a colony near Shaked, while the targeted lands are owned by Palestinian families from Thaher al-Maleh, Zibda village, and Ya’bad town, in the Jenin governorate.

Furthermore, the Israeli government and its so-called “Civil Administration Office,” the executive branch of its illegal occupation, has approved the construction of hundreds of new units in the Efrat illegal colony, south of Bethlehem, south of occupied Jerusalem, in the West Bank.