Israeli colonizers Attack Palestinians, Force Them Out Of Orchards, Near Nablus 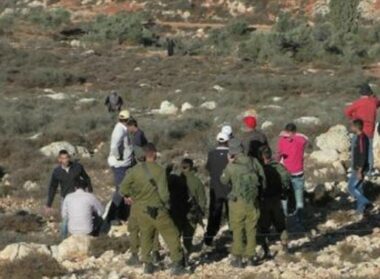 A group of illegal Israeli colonizers attacked, Thursday, many Palestinian farmers while picking their olive trees in Khirbat Yamoun village, south of the northern West Bank city of Nablus, and forced them out of their orchards.

Ghassan Daghlas, a Palestinian official who monitors Israel’s illegal colonialist activities in northern West Bank, said the colonizers attacked the Palestinians and chased them out of their orchards.

Daghlas added that Israeli soldiers arrived at the scene but did not attempt to remove the assailants.

Furthermore, at least sixty colonizers attacked Palestinians while picking their olive trees in the Rommana area in Burin town, south of Nablus.

While attacks by the illegal colonizers are frequent against the Palestinians, their homes and lands, and even the holy sites and graveyards, they tend to witness a serious escalation during the olive harvest season.

Such violations include cutting and uprooting trees, burning trees, and farmlands, and even flooding them with wastewater from the colonies.

Also Thursday, the soldiers injured and abducted a Palestinian after the army attacked many residents defending their lands while the military bulldozers were uprooting them, in the Wad Yasouf area between the towns of as-Sawiya and al-Lubban ash-Sharqiya near Nablus.