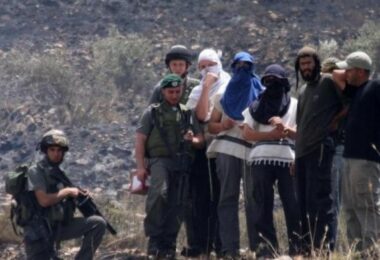 Israeli colonizers attacked, Sunday, several Palestinian shepherds in the Khallet Makhoul area, in the Northern Plains of the Jordan Valley in the occupied West Bank, and injured a child.

Local human rights activist Aref Daraghma stated that the colonizers chased and assaulted several shepherds, and forced them out of a grazing area.

Daraghma added that one of the colonizers assaulted a child, identified as Hussein Yousef Bisharat, 14, causing several cuts and bruises.

He added that, two weeks ago, several colonizers chased the child and tried to assault him while he was returning from a grazing area before the Israeli police detained his mother and interrogated her for several hours after the colonizers claimed that she “harassed them.”

It is worth mentioning that the shepherds in Khallet Makhoul are subject to frequent violations and assaults by the illegal colonialist settlers and the soldiers.