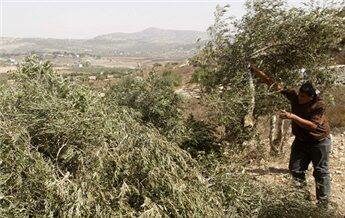 A group of illegal Israeli colonizers invaded, earlier Thursday, Palestinian orchards near the al-Mazra’a al-Gharbiya village, north of the central West Bank city of Ramallah, before cutting and uprooting more than 300 olive trees.

Sa’ada Zaqqout, the head of the al-Mazra’a al-Gharbiya Village Council, said the Palestinians went to their orchards to pick their olive trees but found out that the colonizers have cut and uprooted more than 300 trees.

Zaqout added that the colonizers came from an illegal Israeli colony that was built on stolen Palestinian lands near the orchard, and constantly try to expand it.

On Wednesday, Israeli colonists stole harvesting tools and olive harvest from a Palestinian-owned orchard, in the village of Qaryout, south of Nablus in the northern occupied West Bank.

On Tuesday, a group of colonizers attacked many Palestinians while picking their olive trees in their orchards, west of Nahhalin town, west of Bethlehem in the occupied West Bank.