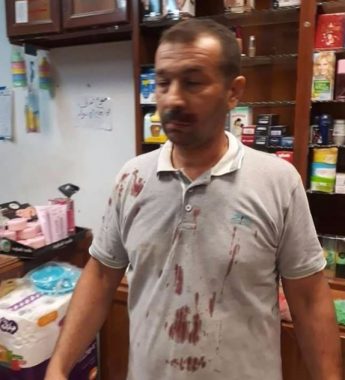 Media sources in Nablus said the attacks took place on the main road between the city and Qalqilia.

They added that the wounded Palestinians have been identified as Abdul-Hafith Mousa, and his sons Mohammad and Tareq, in addition to Mohammad Saleh Awad, from Tulkarem. They were rushed for treatment in Rafidia hospital, in Nablus.

Ghassan Daghlas, a Palestinian official who monitors Israel illegal colonialist activities in northern West Bank, said such assaults have witnessed a very serious escalation after a settler woman was killed in a traffic accident, last Thursday.

He added that Yitzhar colonists have carried out numerous assaults against the Palestinians, and closed the Nablus-Qalqilia road, in addition to causing damage to many cars and wounding many residents, including several children.

Daghlas stated that, in 48 hours, the Israeli assailants burnt a bulldozer, attacked many homes in ‘Aseera ash-Shamaliya town and Jaloud village, south of Nablus, in addition to cutting 900 trees in the al-Lubban ash-Sharqiya village, also south of Nablus, Arraba town, south of Jenin, and Ras Karkar village, northwest of Ramallah in central West Bank, and demolished a well.

He added that the colonists also wrote racist graffiti in al-‘Isawiya and Shu’fat, in occupied Jerusalem, and punctured tires of more than 15 Palestinian cars.