Palestinian Man Turns Himself In after Fatal Collision with Israeli Settler 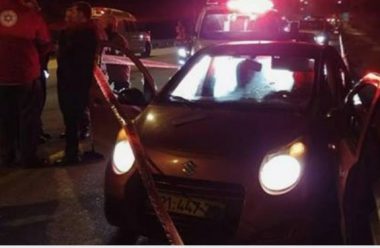 A Palestinian taxi driver, in his sixties, turned himself in to the Palestinian Authority on Thursday evening after the vehicle he was driving hit an Israeli settler. The settler, 42-year-old Hava Rozin, died from her injuries.

After turning himself in, the taxi driver said that he initially fled the scene because he was terrified after he hit the Israeli settler that he would be shot. But after leaving the settler road, he immediately went to the Palestinian Authority in Nablus to report what had happened and turn himself in.

Israeli authorities have, on a number of occasions, shot on site Palestinian drivers who have had traffic accidents with Israeli vehicles, so his fear was not without basis.

The Israeli Intelligence Service Shin Bet announced early Friday morning that there was no evidence that this was a terror attack, saying instead that it was clear that it was a traffic accident.

Nevertheless, dozens of Israeli settlers set off throughout the night into Palestinian areas to carry out ‘revenge attacks’. Gangs of Israeli colonial settlers hurled stones and empty bottles at Palestinian cars in several areas, including near Yitzhar colony, Huwwara and Za’tara military roadblocks, causing damage to more than 40 Palestinian cars, and several injuries. They also attacked several homes in Jaloud village, and closed many main roads in Nablus governorate, in addition to burning a Palestinian car, owned by Mohammad Issa Makhlouf, in Orif village.

The Israeli assailants also tried to burn a number of homes in Jaloud, but the locals clashed with them, before the army invaded the village and removed the settlers.

They also cut around 200 Palestinian olive trees, owned by Na’el ‘Oweisat, in the al-Lubban ash-Sharqiya village, south of Nablus.

In addition, the colonists invaded a cement slab manufacturing plant, and burnt a bulldozer, owned by Mohammad Issa Makhlouf.