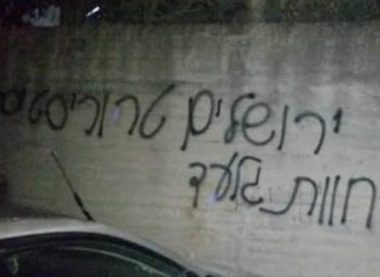 Israeli colonizers infiltrated, on Sunday at dawn, Habayel al-Arab neighborhood of the al-‘Isawiya town, in occupied Jerusalem, wrote racist graffiti and punctured the tires of more than 15 Palestinian cars, the Wadi Hilweh Information Center in Silwan (Silwanic) has reported.

Mohammad Abu al-Hummus, a member of the Follow-Up Committee in al-‘Isawiya, said the Israeli assailants infiltrated into the town from the northeastern part of the town, and headed to Habayel al-Arab neighborhood.

He added that the assailants punctured the tires of more than 15 cars, and wrote racist graffiti, before fleeing the area.

The locals contacted the Israeli police, but instead of investigating the attacks, the officers wiped the graffiti out.

The locals demanded the police to examine the surveillance recordings, especially since all entrances of the town, and the nearby French Hill colony, have dozens of surveillance cameras, which were repeatedly used to identify and abduct Palestinian youngsters, who hurl stones at the police or army in the area during protests.

A video published by Silwanic shows three colonist settlers leaving the town after carrying the attack out.

In related news, a number of colonizers from Yitzhar colony, illegally built on Palestinian lands south of the northern West Bank city of Nablus, hurled stones at several cars, wounding four Palestinians, and caused damage to many cars.