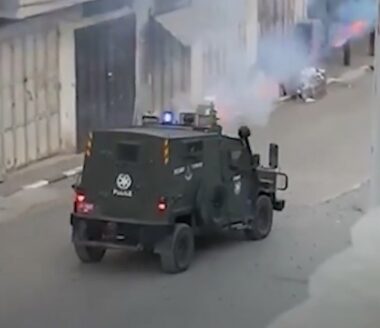 On Monday evening, Illegal Israeli colonizers injured Palestine TV reporters before Israeli soldiers caused many Palestinians to suffer the effects of tear gas inhalation in Azzoun town, east of Qalqilia, in the northern part of the occupied West Bank.

The colonizers attacked the reporters with batons and hurled stones at them at the town’s main entrance, causing several injuries.

They also tried to prevent the journalists from documenting protests that took place after Israeli soldiers invaded the town.

The journalists have been identified as Ahmad Shawar, Bashar Nazzal, and Ayman Nazzal; they suffered various cuts and bruises.

Israeli soldiers also caused many Palestinians to suffer the effects of tear gas inhalation during the protests, which erupted after the army closed the iron gate at the main entrance of the town while illegal colonizers gathered in the area.