Israeli Colonizers Injure Young Man In Jerusalem; Court Punishes Him And Two Who Treated Him 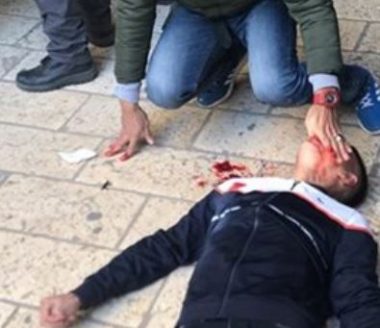 The family of a young Palestinian man from occupied Jerusalem has reported, Monday, that their son suffered moderate wounds, last Wednesday, when a group of extremist Israeli colonizers attacked him as he was leaving al-Aqsa Mosque.

Maysoon al-Moghrabi said that her son, Mustafa Ibrahim al-Moghrabi, 20, was attacked by a group of extremist colonizers, just as he, and other worshipers, were leaving the Al-Aqsa Mosque, before he was rushed to a hospital in the city.

The attack left him bleeding and caused a fracture in his nose in addition to fatigue, various cuts and bruises; he was later discharged and sent home after receiving the needed treatment.

On Saturday evening, the police summoned him for interrogation and forced him under house arrest until his court session for today, Monday.

The wounded young man is facing charges that include “assaulting settlers,” although he was attacked by them while leaving the mosque.

Furthermore, the two young men, Osama Halhouli and Mohammad Awad, who provided Mustafa with the urgently needed first aid, were transferred to Haifa under a five-day exclusion order denying them entry to Jerusalem, until a judge deliberates in their case today.