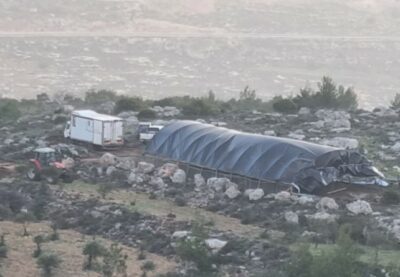 Many illegal Israeli colonizers installed a mobile home and a big tent on Palestinian lands in Battir town, west of Bethlehem, south of occupied Jerusalem in the West Bank.

Ghassan Elian, a local nonviolent activist against the Annexation Wall and colonies in Battir, told the Palestinian News & Info Agency (WAFA) that the paramilitary colonizers invaded the Bardamo area, located between al-Qseir and al-Khammar, in the eastern part of the town, before bulldozing and leveling lands.

He added that the colonizers installed a large tent, about forty meters tall and ten meters wide, in addition to a mobile home.

The colonizers also attacked the Palestinians, who tried to prevent them from installing their illegal outpost on their land.

The invading colonizers also threatened to kill the Palestinians if they didn’t leave the area.

The land, about 23 Dunams, has been subject to repeated violations by the colonizers, trying to illegally annex it, especially since the Israeli occupation army has been preventing the Palestinians from entering or planting it although they have the official deeds proving ownership.