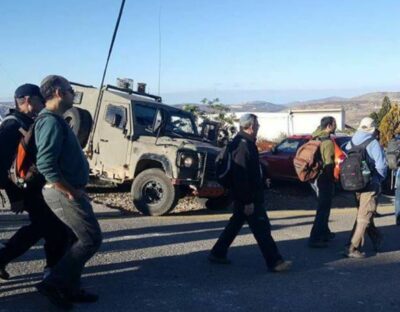 On Thursday morning, a large group of illegal Israeli colonizers, accompanied by soldiers, invaded the archeological area in Sebastia Palestinian town, northwest of Nablus, in the northern part of the occupied West Bank.

Mohammad Azem, the mayor of Sebastia, stated that the colonizers, accompanied by several Israeli army jeeps, came in several vehicles, including buses.

He added that the soldiers closed all areas leading to the archeological site in Sebastia and prevented the Palestinians from entering it.

The soldiers frequently invade Sebastia to accompany colonialist settlers into the archeological area.