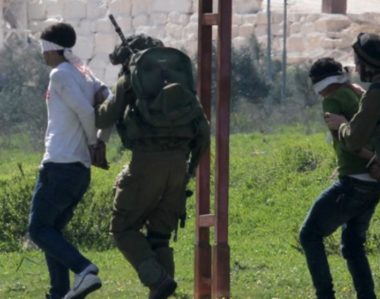 In the West Bank city of Jericho, Israeli special forces invaded the Aqbat Jaber refugee camp, south of the city and abducted a young man, according to Palestinian security sources.

Security sources told Palestinian WAFA News Agency that the special under cover force, driving a Palestinian vehicle, stormed the Aqbat Jaber refugee camp, and broke into the home of Mohammad Abu Zaina, before abducting him and taking him to an unknown destination.

An Israeli army force invaded the refugee camp, apparently to provide cover for the special forces.

In the southern West Bank city of Bethlehem, Israeli troops broke into the homes of two young men, after having invaded both the Aljabal and Nahalin neighborhoods, both suburbs of Bethlehem city.

Local sources in Bethlehem said that both Hatem Alrafaty of Aljabal area and Ibrahim Shakarna of Nahalin, a university student, were abducted by Israeli forces and taken to unknown destinations.

Meanwhile, Israeli forces in the southern West Bank city of Hebron, abducted two other young Palestinian men from the Surif neighborhood, a suburb of Hebron.

Local sources said that soldiers broke into the home of Mahmoud Saleeby, 27, a resident of Beit Ummmar and Tayseer Gheemat, a resident of Surif town. No further information was available as to the destination of the abductees.

Israeli troops invaded the central West Bank city of Ramallah and nearby Albeira town, and abducted both Majd Alboushy, 32, a resident of the Om Al-Sharayet neighborhood of al-Bireh, and Saed Alkhateeb, from the Almazra’a Algharbiya, northwest of Ramallah.

The Palestinian Prisoners’ Society (PPS) also noted that Israeli forces detained a Palestinian from the Al-Aqsa mosque compound in Jerusalem, after a group of Israeli settlers barged into the third holiest site for Muslims.

In addition, PPS reported that a Palestinian man and 2 sons were assaulted and detained by the Israeli army.