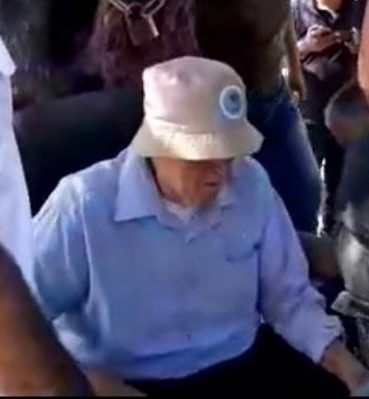 Witnesses said that an illegal Israeli settler pepper-sprayed Mohammad Daoud Abbasi, in the face, along with his sons, causing them all to suffer painful burning of the eyes as well as temporary blindness.

The Abbasi family from Wadi al-Rababeh area of Silwan, were attempting to stop several illegal settlers from carrying out excavations in the vicinity.

In a clear example of the slow and ongoing Israeli takeover of the Palestinian territories, colonists can be seen working in the area, and the sound of an excavator can be heard in the background.

The Wadi Hilweh Information Center (Silwanic) video, taken after the assault, shows Mr. Abbasi and his sons sitting under their own olive tree following the assault.

The men exhibit signs of exposure to pepper spray, including red faces, and closed eyes. Israeli police and medics escorted the victims to an ambulance, due to temporary blindness.