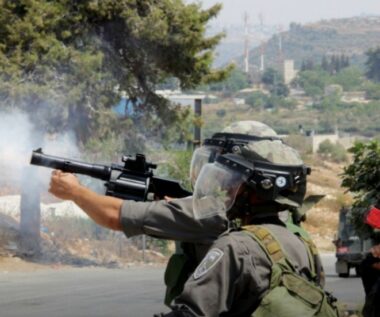 Israeli forces attacked, on Sunday, several non-violent demonstrations in various cities across the occupied West Bank, shooting a teen with rubber-coated steel round and causing others to suffocate on tear gas, the Palestinian News & Information Agency (WAFA) reported.

In the northern occupied West Bank, in Kufur Qaddoum village, east of Qalqilia, Israeli forces shot a 16-year-old in the chest with a rubber-coated steel bullet, causing a moderate injury.

The condition of the minor was unknown at the time of this report.

Activists organized the protest to express their rejection of the escalating settler violence particularly in Burqa village, northwest of Nablus in the northern West Bank.

Akef Jom’a a local activist, stated that the rally was held to support the people of Burqa village in the face of the escalating Israeli settler crimes against them.

Demonstrators raised the Palestinian flag and shouted slogans rejecting the colonists’ attacks on civilians and their properties.

Jom’a added that the soldiers detained some young men, in addition, several young men suffered the toxic effects of tear gas inhalation, they were all treated on site.

In the central West Bank, at the entrance to the Al-Jalazoun refugee camp, north of Ramallah, hundreds of local youths confronted the army who attempted to suppress the rally in rejection of the escalating settler crimes.

Meanwhile, in the village of Al-Mughayyir, northeast of Ramallah, Israeli soldiers fired tear gas and stun grenades at local youths who gathered to resist the military incursion, no injuries were reported.

Additionally, the army suppressed protests in the Sahal al-Baqai’a area in the northern Jordan Valley, firing tear gas and stun grenades, no injuries were reported.

Furthermore, dozens of illegal Israeli colonists stormed the northern entrance of Sinjil town, north of Ramallah under the full protection of the occupation army, blocking the road.