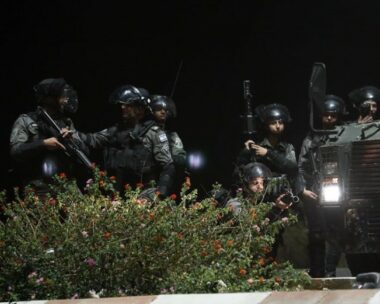 Israeli soldiers injured, on Sunday evening, several Palestinians and abducted at least a few others, near Qalqilia, in the northern part of the occupied West Bank.

Media sources said dozens of Palestinians organized a nonviolent protest in solidarity with the families in Burqa village, northwest of Nablus, subject to seriously escalating attacks by colonialist settlers, who also invaded homes and injured many Palestinians.

Local nonviolent activist Akef Jom’a stated that the protesters carried Palestinian flags and chanted for liberation, in addition to condemning the violations by the colonialist settlers and the soldiers who protect the assailants and attack the families.

In Ramallah, in the central West Bank, the soldiers invaded the al-Mughayyir village, northeast of the city, leading to protests, before the army fired a few live rounds, rubber-coated steel bullets, and gas bombs; there have been no immediate reports of injuries.