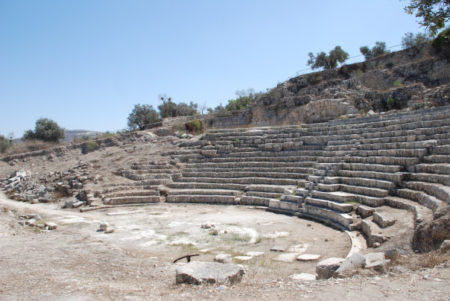 Mayor of Sebastia village, north of Nablus city, Mr. Mohammad Azem, confirmed that Israeli troops invaded the village in the early hours of dawn, and began cordoning off the Sebastia archaeological site which is traced back thousands of years.

He added that Israeli soldiers, since early Tuesday, have been preventing local Palestinian residents from approaching the site.

The local mayor also maintained that Sebastia village has been victim to a series of Israeli colonist attacks, over the past several weeks. He noted that a number of those attacks targeted the same site as well as other monuments in the ancient Palestinian city of Nablus.

Such an Israeli closure of Sebastia archaeological site, comes at a time that Israeli troops in the southern West Bank city of Hebron, have seized parts of Palestinian-owned farm lands, in the vicinity of the Al-Haram Al-Ibrahimi mosque, sacred to Palestinian and international Muslims.

Palestinian officials have recently warned of the Israeli authorities’ plans to expand existing Israeli colonies, taking over Palestinian villages, towns and cities in the occupied West Bank, and erecting bypass roads, for use only by Israeli colonial settlers.