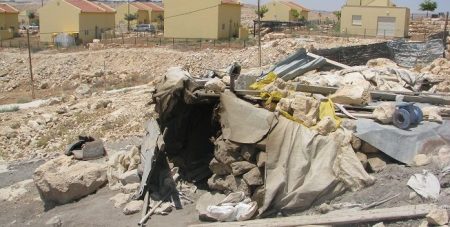 Director of the center, engineer Aziz Al-Hathaleen told the PNN that Israeli military jeeps broke into Umm Al-Kheir in the early morning hours. Israeli civil administration followed them, with a tank, and began the demolition process.

Al-Hathaleen said that this is the second time the community center has been demolished, adding that Israeli forces continually harass the people and restrict their movement, as the community is located in Area C of the West Bank, which falls under Israeli civil and military control, and faces ongoing settlement expansion and demolition of Palestinian houses.

The Umm Al-Kheir community has faced demolition by Israeli soldiers many times, yet the community simply rebuilds it.