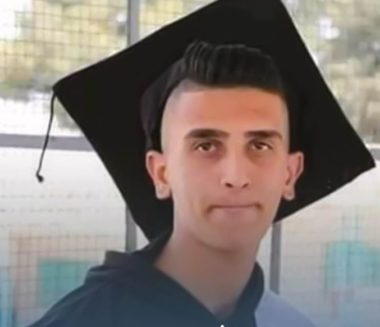 Updated: A Palestinian teenager was shot dead, on Saturday night, by Israeli soldiers in the town of Beit Awwa, west of Hebron City in the southern occupied West Bank.

The Palestinian News and Info Agency reported that Israeli soldiers opened fire towards three Palestinian civilians near Beit Awwa, seriously injuring one of them, identified as Badawi Khaled al-Masalma, 18.

He was left to bleed helplessly, as the soldiers denied access of Palestinian medics to the scene, and was announced dead of his critical wounds a few minutes later.

The Palestinian suffered multiple gunshot wounds to various parts of his body.

The Israeli army claimed the Palestinian “apparently threw Molotov cocktails.” After killing him, the soldiers took his body away.

The soldiers also abducted two other Palestinians and took them to an interrogation facility.

Israeli Ynet News quoted the army claiming that the soldiers “were operating near settlements” in Hebron area, and that the allegedly “saw three Palestinians throwing Molotov cocktails.”

On Friday, the soldiers killed one Palestinian and injured many others, when the army attacked a group of protesters, hundreds of meters away from the perimeter fence.