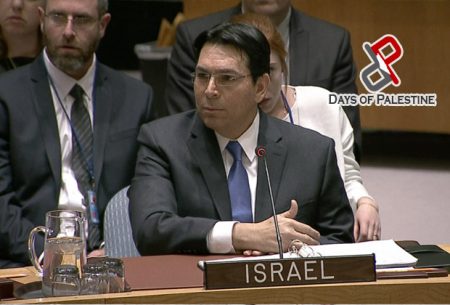 Israel is blackmailing impoverished countries to obtain votes in its favour at the UN, the Coalition for Accountability and Integrity AMAN revealed on Sunday.

AMAN’s Director, Azmi Shuaibi, said that Israel uses the funds allocated to the UN to buy votes in favour of or against proposals criticizing its violence and oppression against the Palestinian people.

“During the last three years, the organisation monitored violations carried out by the Israeli foreign ministry,” Shuaibi said, according to Days of Palestine.

Among these violations, he said, was “putting pressure on the Nigerian government in order to refrain from voting for a resolution that proposed a timetable for ending the Israeli occupation of the Palestinian lands.” The draft resolution was proposed on 31 December 2015.

He reiterated that the Palestinians received a written agreement by Nigeria to vote for the resolution, but the African country retreated at the last minute “due to the Israeli blackmailing.”

“Based on the observations of his organization, there are several transparency-related doubts regarding the Israel heading of the Legal Committee at the UN; a position it has been chairing since June last year,” he said.

He noted that the Israeli cuts of funds allocated to the UN that followed UNSC Resolution 2334, which condemned Israeli settlements “was not more than a trick.”

Shuaibi reiterated that the funds had been used to “put pressure and blackmail” developing countries in order to get their votes.

On March 30, Israel cut $2 million of its UN funding. This came after the January cut of $6 million which followed the UN Human Rights Council adopting four resolutions against Israeli human rights violations.

The Israeli foreign ministry claimed that this was in an effort to correct the “discrimination” which the UN practices against it.

The Coalition for Accountability and Integrity (AMAN) is affiliated to Transparency International.