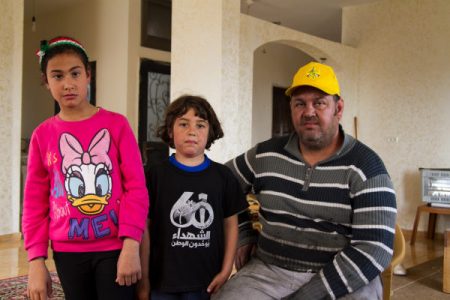 At 2am on Wednesday morning, three intelligence vehicles and six military vehicles arrived at the building where Shahar Dharma lives with his family in Kafr ad Dik; Salfit municipality. For over two hours, Israeli forces raided and searched the apartments of the three families living in the building, harassing the occupants.

(Photo: Shahar with his son Bilal (5-yo) and daughter Sahar (8-yo). –ISM/Charlie Donnelly)

According to the International Solidarity Movement, soldiers kicked and banged on the door with their rifles until Shahar Dharma went down the stairs to open it. He told the soldiers that his children were asleep, and that they should wait until they had been woken up, as they would be scared if they saw the soldiers. However, Israeli forces pushed him aside and almost 60 soldiers poured into the building to search the three apartments.

Shahar’s daughter, Sahar, awoke to the sight of Israeli soldiers in her bedroom and froze in fear. Her father managed to enter the room and reassure her, as she started to cry, whilst waking the other children – Bilal, 5, and Sahjar, 13 – to take them into the living room. Sahar held onto her father with a tight grip, and asked for her mother. Shahar had to remind his daughter that her mother passed away last year, but Sahar insisted: ‘I don’t care,’ she cried, ‘I want to be with my mother.’

Israeli forces spent two hours turning the apartment upside-down, searching every nook and cranny of the home. During the raid, the family’s mobile phones were confiscated whilst they were forced to stand in the living room and were not allowed to sit down. Shahar’s wife, who is eight-months pregnant, became sick and dizzy, whilst his mother, who suffers from cancer was not allowed to go to the bathroom. 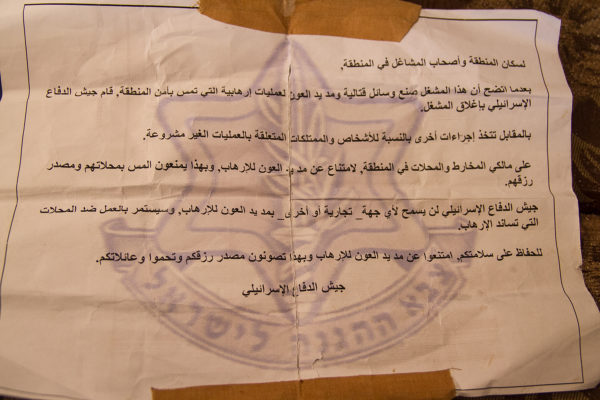 A paper, written in Arabic, was posted on the workshop door claiming intelligence had informed them that people in the area were aiding terrorists by constructing military equipment, and were a threat to Israel and the security in the area. The paper continued to say that people would not be harassed by Israeli forces, but would be left to live and work freely if they did not support ‘terrorists’. On the other hand, Israeli forces could not guarantee the safety of anyone who helped ‘terrorists’, nor the safety of their families and livelihoods. The locals claimed this was part of a ‘media operation’ by Israeli forces to claim a victory over ‘terrorism.’ But, as Shahar says, ‘If they had found anything illegal in my workshop I would already be in prison’.

Shahar refused to sign the receipt for over half an hour, partly because he could not read what it said, but also because it became clear that the Israeli soldiers had written that only one piece of equipment had been confiscated from his workshop. In fact, Israeli forces had confiscated various tools and materials from his workshop, including a welding torch, a drill, and a disk cutter, with a total worth of over 4,000 shekels.

Eventually, Shahar was punched in his left eye by one of the soldiers and told that if he did not sign the receipt, they would arrest him: ‘What do you think?’ asked one of the Israeli soldiers, ‘Sign and stay with your children, or we can arrest you? You choice.’ After signing the receipt under duress, Shahar was taken outside and pushed against a jeep by two Israeli soldiers, who held up a sign in Hebrew whilst a third took a photograph. Finally, the captain of the Israeli forces told Shahar that if he reopened his workshop they would return with a bulldozer to demolish the building, for which the family would have to pay. The soldiers finally left the house approximately at 3:30 am.

Confiscation notice signed by Shahar under duress. Not all confiscated items were listed. Photo: ISM/Charlie Donnelly

Shahar does not know if he will ever get his property back. Having contacted the DCO (Distric Coordination Office) regarding the confiscation he was told that they would not help him as they were on holiday for Pesach for the next week.

The last time Shahar’s mother experienced a similar raid was ten years ago, during which four of her sons were detained. Two were released shortly after, but the other two men spent three years and four years in prison, respectively.

The young Sahar has been unable to attend school or leave the house at all since that early morning, saying that she is ‘scared of the army’. Of the 25 people living in the building, sixteen of the residents are under the age of eighteen. Shahar sees this as just another form of ‘psychological warfare’ conducted every day against Palestinians by the occupying Israeli forces.