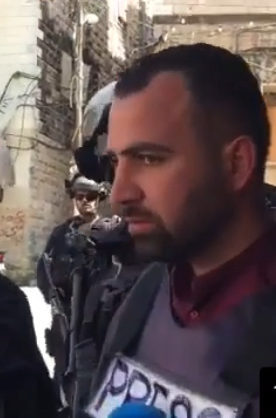 Sources told the Palestinian Information Center that the Israeli police closed the Bab al-Amud or Damascus Gate, one of the entrances to the Old City, for several hours.

Police reportedly abducted three youths in the area, they were identified as Khaled Sukhon, Mohamed Ateiq and Hasan Ateiq.

Palestine TV reported that Israeli forces released the four young men, on the condition that they be banned from entering the Old City of Jerusalem for 10 days.

Witnesses told Palestinian WAFA News Agency that several Israeli military vehicles stormed Ya’bad town and proceeded to ransack family homes, resulting in the detention of two Palestinians, one of whom is 17. No further information was available at the time of reporting.

Sources told PIC said that the Israeli police arrested three former prisoners, in the city of Jerusalem, identified as Murad Elayyan, 34, Ashraf al-Sharbati, 44, and Nezam Abu Romouz, 37. No further information was available at the time of reporting.