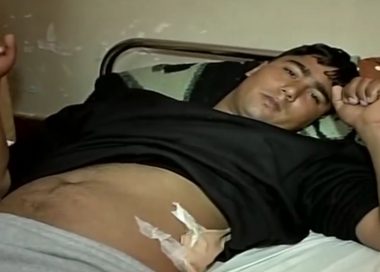 Israeli navy ships attacked, on Sunday evening, a Palestinian fishing boat in the Sudaniyya Sea, in the northern part of the Gaza Strip. The Navy fired many live rounds at the fishing boat, wounding one fisherman. They then seized the boat and detained five fishermen.

The attack took place in Palestinian territorial waters, less than 2.5 nautical miles from the shore.

Amjad Sharafi, secretary-general of the Gaza Fishermen Union, said in a statement that the Israeli navy illegally attacked a fishing boat owned by Khamis Abu Sadeq, and confiscated it.

The wounded fisherman, Mohammad Bakr, said the navy also fired many live rounds, destroying the motor and causing serious damage to the boat, in addition to wounding him in the abdomen.

He added that the navy ordered the fishermen to jump in the water, one by one. 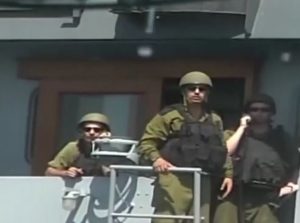 “They ordered us to strip, and jump in the water,” Mohammad said, “I told them I had been injured, so one of them ordered me to raise my hands in the air while lying down, and he removed my clothes, then had us all jump in the water.”

All of them were abducted and interrogated, and were released later, but their damaged boat was confiscated and towed to Ashdod Port.

The boat’s owner said the navy had destroyed his only source of livelihood, and confiscated it.

“Even if they return the boat to me, its already been destroyed,” he added, “This boat provided livelihood to twelve Palestinians.”

Yamen al-Madhoun, of the Al-Mezan Center for Human Rights said that this year alone, the navy has killed one fisherman, abducted ten others, and wounded four, in addition to confiscating three boats.

It is worth mentioning that in the last ten years, the navy has killed five fishermen, wounded 107 others, and abducted 547 fishermen, and confiscated 181 boats.