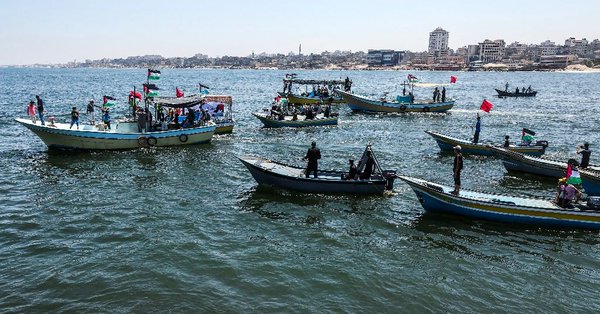 On Tuesday, the Israeli Navy confiscated a Palestinian boat off the coast of Gaza. The passengers on the boat included wounded Palestinians who had exhausted the limited medical resources available in Gaza and were seeking treatment abroad.

This is the second such attempt to break the Israeli military siege of Gaza in the last two months.  The previous boat, which set sail in May, was also forcibly boarded and confiscated by the Israeli navy, and the passengers, including terminally ill cancer patients trying to obtain lifesaving medical treatment, were returned back to imprisonment inside the Gaza Strip.

The people of Gaza, who number nearly 2 million, have been under siege since June 2007, when Israeli authorities decided to close all borders – including the Mediterranean Sea, along the west coast of the Gaza Strip.

Since that time, residents of Gaza have been subjected to Israeli-imposed sanctions which have prevented the import of much-needed fuel, electric equipment, medical equipment, books, electronics, building materials and food.

In March of this year, fed up with the massive unemployment and hopelessness that the siege has wrought, tens of thousands of Palestinians began protests along the Gaza-Israel border demanding that the siege be ended and the borders be opened again.

Many of those protesting are the children and grandchildren of refugees who were forced out of their homes inside what is now Israel for the creation of the Jewish state in 1948. They are demanding the internationally-recognized right of return of the Palestinian refugees.

Israeli forces have killed 140 of the unarmed protesters since March 30th. Over 7,000 have been wounded by Israeli forces, many with live fire. No Israelis have been killed during these months of protest.

In Tuesday’s attempt to break the siege, hundreds of Palestinians gathered on the beach to see the boat off, and the dozen passengers and crew waved goodbye from the deck of the small boat. They had hoped to reach Europe, where they could receive medical care that is unavailable in the besieged Gaza Strip.

Instead, just three miles off shore they were intercepted by the Israeli Navy, who abducted the passengers and confiscated the boat. As of late Tuesday night, all had been returned to the Gaza Strip, which is imprisoned on 3 sides by Israeli forces, and on the fourth by Egyptian forces.