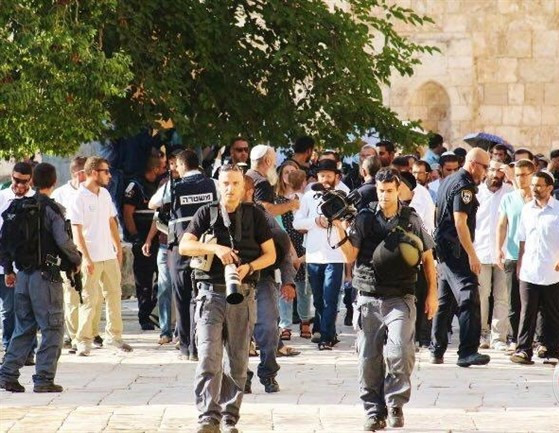 Dozens of Israeli colonial settlers, belonging to the Temple Mount group, on Sunday morning, stormed the vicinity of the Islamic holy shrine of Al-Aqsa Mosque in occupied East Jerusalem..

The Temple Mount group had previously called on Israeli colonists to perform rituals at the Al-Aqsa Mosque, also known as the Al-Haram Ash-Sharīf, widely agreed to be an Islamic holy place.

New measures of the Israeli occupation authorities’ efforts to fight the now internationally-spread, Coronavirus, are claimed to be the reason for the tightened restrictions. High fines have been threatened only against Palestinian locals and scholars, allegedly to avoid the assembly of large numbers of people, however the Israelis are not subject to the same rules.

In September 2000, late Israeli Prime Minister, Ariel Sharon, invaded, along with almost 3000 Israelis, including Jews, police forces and officials, stormed the holy shrine, which sparked the second Palestinian Intifada (uprising) otherewise known as the Al-Aqsa Intifada, which took the lives of 3,000 Palestinians over a 5 year period.

In the last 2 decades, Israelis and illegal settlers have regularly stormed the Muslim holy site with the protection of Israeli police and performed rituals, which are forbidden. Israelis who wish to pray near the mosque have a designated area for prayer, known among Muslims as the Buraq Wall, know by Jews as the Wailing Wall.

On Sunday, the Palestinian Waqf council announced the decision to suspend all Muslim prayers at the Al-Aqsa Mosque, starting Monday at dawn, until further notice.