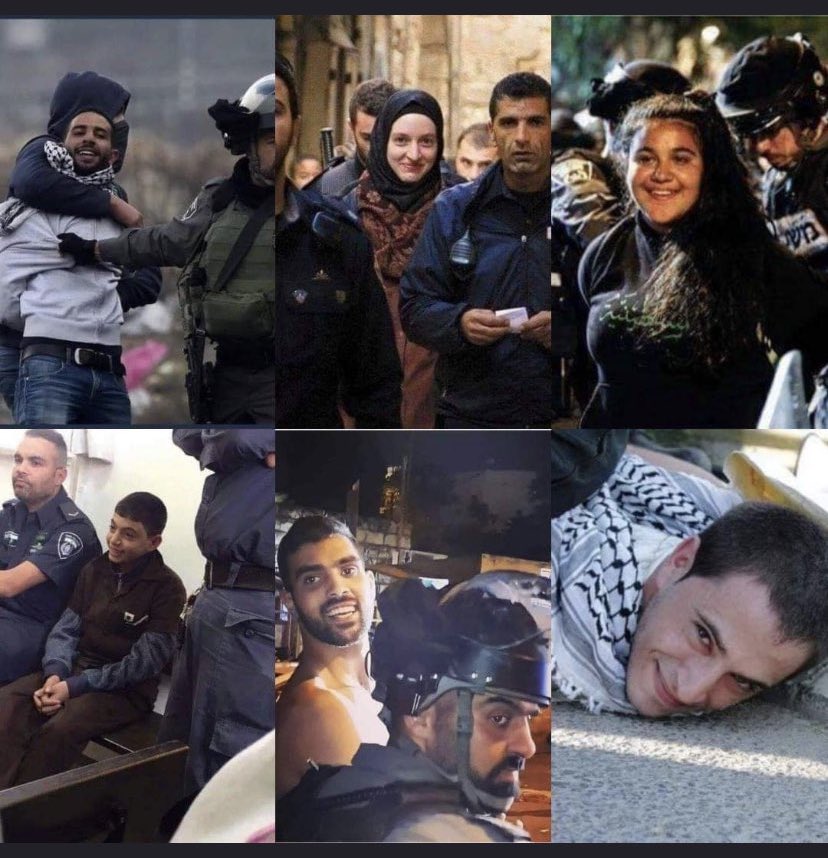 The Israeli paramilitary mobs were allowed to continue their attacks on Palestinian neighborhoods with impunity throughout the night, often with Israeli police looking on and sometimes participating in the destruction and assaults.

Of those being held in detention inside Israel since the escalation began on Monday, the vast majority are Palestinians with Israeli citizenship. A social media campaign led by Palestinian youth has called on those being detained to smile: they say that they will not let the Israeli occupiers strip them of their humanity, and have vowed to show that by trying to smile as they are being taken into captivity.

Some were arrested on the street, while many others had their homes invaded by Israeli police and were taken into custody, often having to suffer physical and verbal abuse by the Israeli arresting officers.

The Israeli police raided Palestinian homes and severely beat the children, women and everyone in the house, and arrested young men and women. This is the reality of Israel@sarahleah1@washingtonpost@UN_HRC@TheEconomist@TheGardianNews@nytimes@ForeignPolicy@HRW#Palestine pic.twitter.com/C5OeZogpZt

The Israeli police have reported that they are holding 232 in custody over the unrest, some as young as 13 years old. The police did not release any information on the treatment and conditions of those being held in Israeli detention – although the detention facilities have a long history of document abuse of detainees.

In the West Bank Wednesday night, Israeli paramilitary colonial settlers invaded the northern West Bank town of Burin, south of Nablus, and demolished part of a house under construction, according to local sources.

In addition to demolishing part of a house, the paramilitary settlers also set fire to fields.

Settler violence against the civilian Palestinian population and their properties has been on the rise throughout the West Bank and Jerusalem, as Israeli authorities have allowed the paramilitary settlers to carry out assaults on Palestinian civilians and their property with almost total impunity.

On Thursday morning, following a night of confrontations, clashes broke out between the youths and the Israeli police in the city of Kafr Qasim, inside the border of what is now Israel (although the state of Israel has never officially declared its borders, and has continually expanded onto Palestinian land since its creation in 1948).

According to local sources, the confrontations intensified after a large group of Israeli settlers invaded Al-Sultani Street, a main street in the village. Israeli police accompanied the invading settlers and pursued the Palestinian youth who tried to repel the invasion. The Israeli police fired bullets and tear gas canisters at the youth.

The youth burned Israeli police cars on Al-Sultani Street after the Eid prayer ended, in protest against the Israeli incursions into Al-Aqsa and the ongoing attacks on Palestinians in the West Bank, Gaza Strip and inside Israel.