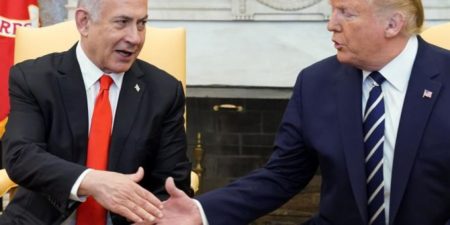 The Israeli human rights organisation, “B’Tselem,” said, in statement, that US President Donald Trump’s plan drains the principles of international law of any meaning and completely neuters the concept of accountability for breaching them.

B’Tselem added that the American administration’s plan, branded as the “Deal of the Century,” is more like Swiss cheese, with the cheese being offered to the Israelis and the holes to the Palestinians. There are many ways to end the occupation, but the only legitimate options are those based on equality and human rights for all. This is why the current plan which legitimizes, entrenches and even expands the scope of Israel’s human rights abuses, perpetuated now for over 52 years, is utterly unacceptable.

The Trump plan drains the principles of international law of any meaning and completely neuters the concept of accountability for breaching them. Trump suggests rewarding Israel for the unlawful and immoral practices in which it has been engaging ever since it seized the Territories. Israel will be able to continue plundering Palestinian land and resources; it will also get to keep its illegal settlements and even annex more territory; all in complete defiance of international law. Israeli citizens who live in the Territories will continue to enjoy all the rights granted to other Israeli citizens, including full political rights and freedom of movement, as if they were not living inside an occupied area at all.

Palestinians, on the other hand, will be relegated to small, enclosed, isolated enclaves, with no control over their lives as the plan eternalizes the fragmentation of Palestinian space into disconnected slivers of territory in a sea of Israeli control, not at all unlike the Bantustans of South Africa’s Apartheid regime. With no territorial contiguity, Palestinians will not be able to exercise their right to self-determination and will continue to be completely dependent on Israel’s goodwill for their daily life, with no political rights and no way to influence their future. They will continue to be at the mercy of Israel’s draconian permit regime and need its consent for any construction or development. In this sense, not only does the plan fail to improve their predicament in any way, but, in fact, it leaves them worse off as it perpetuates the situation and gives it recognition.

This plan reveals a world view that sees Palestinians as perennial subjects rather than free, autonomous human beings. A “solution” of this sort, one that fails to ensure the human rights, liberty and equality of all people living between the Jordan River and the Mediterranean Sea and instead perpetuates one side’s oppression and dispossession of the other – is not a legitimate solution. As a matter of fact, it is no solution at all, just a recipe for generations more of oppression, injustice, and violence.