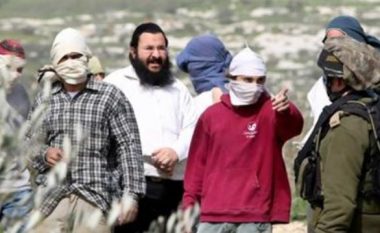 Illegal Israeli settlers, on Tuesday, assaulted Palestinian civilians near the village of Nil’in, west of Ramallah, in the central occupied West Bank according to local sources.

Sources told Palestinian WAFA News Agency that Israeli colonists ambushed olive farmers who were harvesting their olives, and threw stones at them striking an elderly man in his head.

Settlers also damaged the ladders and blankets used by Palestinians to pick the olives, in a further attempts to intimidate and force the farmers off the land.

The farmer, identified as Khalil Umair, 73, was injured by the illegal settlers on his own land, the Palestinian Information Center reported.

Furthermore, on Tuesday, near the southern West Bank city of Bethlehem, Israeli settlers swiped the olives harvested and damaged the trees, on al-Jabaa village land, owned by 30 villagers, according to a local official.

Additionally, another olive yield was stolen by Israeli settlers in the northern West Bank village of Burin, south of Nablus City, according to a local official.

Beyond the apartheid barrier, near Salfit, in the northern West Bank, Palestinian farmers were able to reach their crops, according to a local resident.

Mohammad Amer, from nearby Masha village, told WAFA that Palestinian farmers that were able to access their
land, found their olive harvest gone, and the branches of 60 trees cut, presumably by settlers.