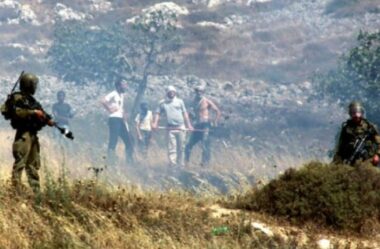 Illegal Israeli colonists stormed, on Wednesday evening, the al-Lubban ash-Sharqiya village, south of Nablus city in the northern occupied West Bank, according to a local official.

Yaqoub ‘Owais, the head of the village council, told the Palestinian News & Information Agency (WAFA) that dozens of colonialist settlers invaded the village via the main entrance to the town.

‘Owais added that the settlers were under the full protection of the Israeli army, who fired tear gas canisters at the Palestinian civilians who protested the settler invasion,

The army shot and injured one young man in the shoulder with a tear gas canister, his condition was not known at the time of this report.

Eyewitness stated that young Palestinian men gathered at the site, and burned dozens of tires in an ongoing display of resistance to the continued settlement activities and settler attacks in the area.

Since May of 2021, the Israeli army has shot and killed nine Palestinian civilians in Beita town, who protested the illegal colonization of their lands.