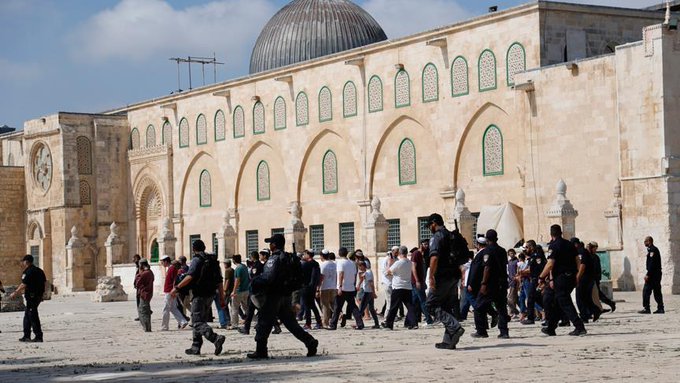 In Nablus, four Palestinians were wounded by live ammunition, while dozens more suffered from tear gas inhalation during clashes with the Israeli occupation forces when around 1300 Israeli settlers, accompanied by soldiers, invaded an area east of Nablus.

Wafa News Agency reported that confrontations broke out when hundreds of settlers stormed the mosque located east of Nablus.

Four Palestinians were wounded by live bullets in the lower limbs.

They were taken to Rafidya Hospital for treatment. Dozens more inhaled tear gas. During the confrontations, after the Israeli occupation forces fired tear gas canisters.

According to Israeli sources, 1,300 settlers stormed the compound early in the morning, heavily guarded by the Israeli occupation army.

In the second incident, in Jerusalem, dozens of Israeli settlers on Tuesday morning renewed their provocative incursions into the Al-Aqsa Mosque from the Bab al-Mughrabi Gate, where the occupation forces have maintained a presence since they occupied Jerusalem in 1967 .

Members of the special units of the Israeli police regularly provide protection to groups of right-wing Israeli settlers during their tours and attempts to perform prayers and rituals in the mosque.

These settlers have as their stated purpose to remove the mosque, and replace it with a Jewish synagogue. To that end, they have repeatedly invaded the mosque grounds, as well as dug underneath it in an attempt to cause it to collapse.

These invasions are often carried out in the vicinity of the building and chapel of Bab al-Rahma on the eastern side of the blessed mosque.

To facilitate the entry of the Jewish Israeli settlers, the Israeli occupation forces prevent the entry of Muslim worshipers.

The al-Aqsa Mosque is considered the third holiest site in Islam, and is a place of pilgrimage for Muslims around the world.