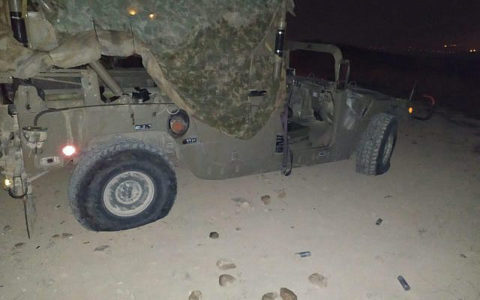 The Israel Defence Forces told The Times of Israel that a soldier was lightly injured overnight Saturday, by a rock, during clashes between security forces and settlers near the illegal Yitzhar settlement, in the northern West Bank,

The riots, involving approximately 30 settlers, who hurled stones at troops and punctured tires of military vehicles, to which the army responded with riot dispersal means.

The soldier received medical treatment at the scene, and no arrests were reported.

A teenaged settler living in the illegal Yitzhar settlement, was arrested on October 16, for his involvement in an incident of physical violence against human rights activists, then released two days later. 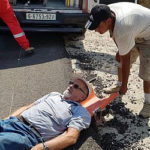 Israeli rights groups reported that a gang of masked settlers armed with crowbars, brutally assaulted a group of activists, among them an 80-year-old rabbi, assisting Palestinian farmers in the northern West Bank with their harvest.

Five international volunteers from the US, UK and other European countries were injured, a Yesh Din field worker stated. Israeli activist Rabbi Moshe Yehuda, shown above, was attacked by settlers, and suffered a broken arm and head injury, was evacuated to Meir Medical Center.

Rabbis for Human Rights recruits volunteers to accompany Palestinians, who say they face regular intimidation and violence while tending to crops located near settlements throughout the West Bank. 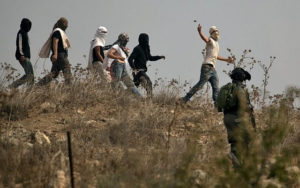 This year’s annual olive harvest, which has just begun, has seen several incidents of violence in the West Bank. The harvest is a frequent site of clashes between Palestinians and Israeli settlers that the Israel Defence Forces claims it seeks to prevent.

The same teenaged settler was re-arrested Friday night on suspicion of verbally threatening a battalion commander. The IDF stated that it “unequivocally condemns physical and verbal abuse toward its servicemen and takes a very harsh view of this incident,”