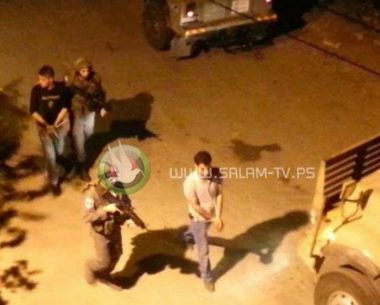 Israeli soldiers abducted, on Monday at dawn, twenty-one Palestinians in several parts of the occupied West Bank, after the soldiers invaded and ransacked their homes, in addition to breaking into a jewelry store, causing serious damage, and illegally confiscating its belongings.

Several army jeeps invaded the center of Ramallah city, in central West Bank, before soldiers stormed many homes and stores, and abducted one Palestinian, identified as Nader Saba.

The soldiers also invaded a jewelry store, owned by members of al-Asbah family, and violently searched it, before illegally confiscating its belongings.

Also in Ramallah, the soldiers invaded Ni’lin village, west of the city, searched many homes, and abducted the Coordinator of the Popular Committee against the Annexation Wall and Colonies, Abdullah Abu Rahma, in addition to Adeeb Abu Rahma and Ahmad Mohammad Abu Rahma, from Bil’in nearby village.

The soldiers also invaded many neighborhoods in Hebron city, in addition to nearby towns of ath-Thaheriyya, Yatta and Ethna, and installed roadblocks on the main roads leading to Sa’ir and Halhoul towns, in addition to Hebron’s northern entrance, before stopped and searching dozens of cars, and interrogated many Palestinians while inspecting their ID cards.

In addition, the soldiers invaded Jenin city, and al-Yamoun town, west of Jenin, in northern West Bank, and installed a roadblock on the Jenin-Jaffa road, in an area leading to many nearby villages and towns, before stopping and searching dozens of cars, and inspected the ID cards of dozens of Palestinians while interrogating them.