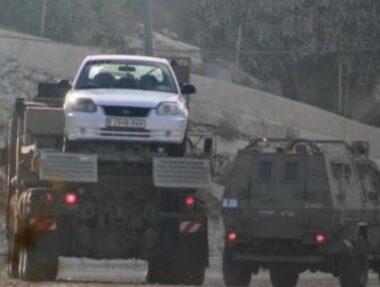 Israeli soldiers abducted, on Sunday at night, a young Palestinian man from Arraba town, southwest of the northern West Bank city of Jenin, and confiscated his car from, after stopping him at a military roadblock.

Media sources said the soldiers, stationed at the Barta’a military roadblock, southwest of Jenin, stopped and searched dozens of cars, and interrogated many Palestinians.

They added that the soldiers abducted Wael Salman Sha’er, and confiscated his car, before moving him to a nearby military base.

In related news, the soldiers attacked a procession in Burqin nearby town, when dozens of residents marched demanding the army to transfer the corpses of the slain child, Yousef Soboh, 16, and Osama Yasser Sobeh, 22, back to their families for proper burial; during the protest that soldiers shot four young men.

It is worth mentioning that Yasser and Osama were among five Palestinians who were killed by the Israeli army near Jenin and Jerusalem, on Sunday at dawn.