Israeli Soldiers Abduct A Woman And Thee Children In Hebron 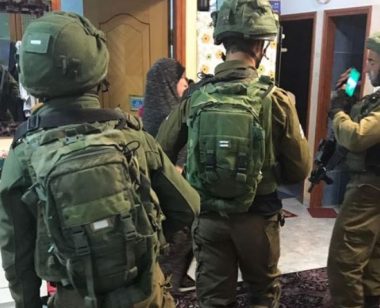 Israeli soldiers abducted, late on Sunday at night, the wife a Palestinian man who was killed by the army several years ago, in addition to three children, from their homes in the southern West Bank city of Hebron.

The soldiers invaded and searched many homes, and abducted Donya Sa’id, the wife of Nashat al-Karmi, who was killed by the army in October 2010.

The children were taken prisoner after a group of extremist illegal Israeli colonists attacked two homes owned by members of Qfeisha family.

Media sources in Hebron said the three children were held for several hours, and were interrogated without legal representation, before they were released.

The soldiers also invaded the home of Mo’tasem Natsha, the brother of Ma’moun Natsha, who was killed by the army in October 2012, and violently searched it.