Israeli Soldiers Abduct A Wounded Palestinian From Ambulance Near Hebron 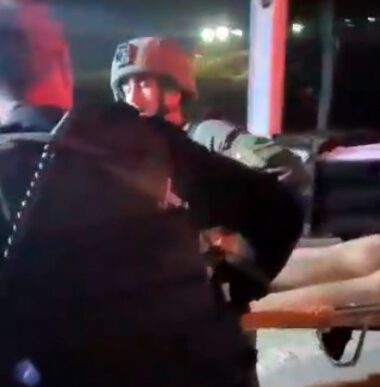 On Monday night, Israeli soldiers attacked a Palestinian ambulance and its crew before abducting a wounded Palestinian in the Tiwana area in Masafer Yatta, south of Hebron, in the southern part of the occupied West Bank. Israeli sources said a colonizer was seriously injured during confrontations with Palestinian farmers in the area.

The Palestinian Red Crescent Society (PRCS) said a group of colonizers attacked one of its ambulances and punctured its tires before Israeli soldiers assaulted its crew and abducted a young wounded Palestinian man.

The incident occurred when a large group of colonizers invaded Masafer Yatta and assaulted many Palestinians in the at-Tiwani area, leading to a scuffle before the colonizers fired many live rounds.

Israeli sources said a colonizer was seriously injured when a Palestinian farmer struck him with a shovel during the ensuing confrontations.

They added that the Israeli police and the army arrived at the scene, “broke up the brawl,” and moved the wounded colonizer to Soroka Medical Center.

Hours after the incident, dozens of soldiers invaded the Tiwana area, stormed and ransacked homes, and abducted many Palestinians.

It is worth mentioning that Masafer Yatta and surrounding Palestinian communities are subject to constant Israeli violations, including numerous assaults by the illegal colonizers against the Palestinian farmers and their lands.