Israeli Soldiers Abduct Father Of A Slain Palestinian In Ramallah 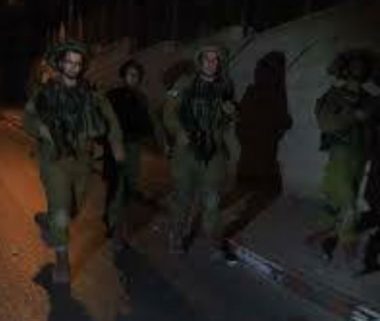 Israeli soldiers abducted, on Thursday at dawn, a father of a Palestinian who was killed by Israeli army fire, on June 16th 2017, along with two other Palestinians, after stabbing and opening fire on Israeli soldiers, killing one and mildly wounding another, in Sultan Suleiman Street, near Bab al-Amoud (Damascus Gate), in occupied Jerusalem.

The soldiers invaded Deir Abu Mashal village, northwest of the West Bank city of Ramallah, and abducted Hasan Ankoush, the father of Adel Ankoush, 18, who was killed along with Bara’ Ibrahim Saleh, 18, and Osama Ahmad Ata, 19.

The soldiers also invaded and violently searched the home of Osama Ata, one of the three slain Palestinians.

It is worth mentioning that, on June 21st, the soldiers abducted Zeina Ankoush, the mother of Adel.

During the stabbing in Jerusalem, an Israeli officer, identified as Hadas Malka, 23, was killed, while two Palestinian bystanders were injured; one suffered a moderate injury, and the other was mildly wounded.