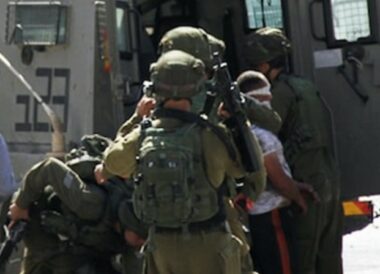 Media sources said the soldiers installed a roadblock at the main entrance of the town, before stopping and searching dozens of cars, and interrogated many Palestinians while inspecting their ID cards.

They added that the soldiers abducted four young men, identified as Ahmad Samir Daraghma, Ahmad Wajeeh Daraghma, Abdullah Othman Oweiss, and Ahmad Mansour Awaisa, before taking them to a nearby military base.

On Thursday at dawn, the soldiers abducted eleven Palestinians, including siblings, in addition to a father and his son, in Tubas, Jenin, Nablus, Bethlehem, and Hebron, in the occupied West Bank.

Furthermore, the soldiers forced five Palestinians to demolish their homes in Beit Hanina, north of the occupied Palestinian capital, Jerusalem, in the West Bank, allegedly for being built without a permit.