Soldiers Abduct A Child Near Bethlehem 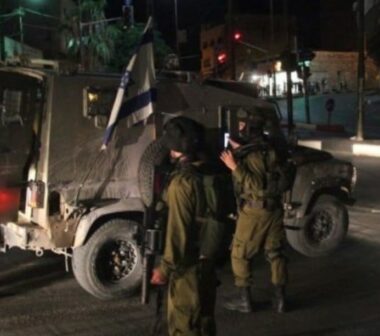 Israeli soldiers abducted, on Friday at dawn, a Palestinian child in Doha town, west of Bethlehem, south of the occupied capital, Jerusalem, in the West bank.

They added that the soldiers abducted a child, identified as Adham Mohammad Abu Srour, 16, from his home, before moving him to the nearby Etzion detention and interrogation facility.

During the invasion, the soldiers fired several gas bombs, concussion grenades, and rubber-coated steel bullets at Palestinians who protested the invasion and hurled stones at the army jeeps.

On Thursday evening, the soldiers abducted four young men from the al-Lubban ash-Sharqiya town, south of the northern West Bank city of Nablus.

On Thursday at dawn, the soldiers abducted eleven Palestinians, including siblings, in addition to a father and his son, in Tubas, Jenin, Nablus, Bethlehem, and Hebron, in the occupied West Bank.

Furthermore, the army forced five Palestinians to demolish their homes in Beit Hanina, north of occupied Jerusalem, allegedly for being built without a permit.