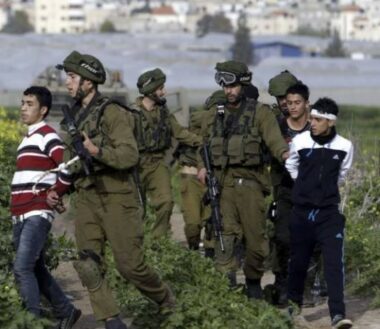 On Wednesday, Israeli soldiers abducted four teenage boys at the main entrance of Turmos Ayya town, north of Ramallah, in the central part of the occupied West Bank.

Media sources said the soldiers installed a military roadblock at the town’s main entrance before stopping and searching dozens of Palestinians and cars.

The four were on their way to school when the soldiers abducted them and took them to a nearby military base.

On Wednesday dawn, Israeli soldiers abducted twenty-three Palestinians from several parts of the occupied West Bank, including the occupied capital, Jerusalem, and repeatedly assaulted a young man, causing various wounds, including to the head.