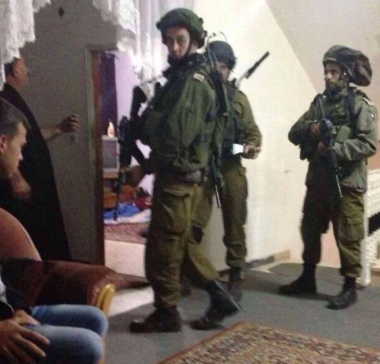 Israeli soldiers abducted, on Thursday at dawn, six Palestinians, including a young man who was detained minutes after his release from prison, and assaulted two others, in several parts of Hebron governorate, in the southern part of the occupied West Bank.

In Doura town, southwest of Hebron, the soldiers abducted Hasan Mahmoud Abu Zneid and Ahmad Bassam az-Zeer, after forcing them out of their homes, and repeatedly assaulted them, while interrogating them in the streets.

It is worth mentioning that the soldiers invaded and ransacked many homes in several villages, towns and refugee camps in the governorate, especially in Doura, Deir Samit, Yatta, Sa’ir, Beit ‘Awwa and the ath-Thaheriyya.