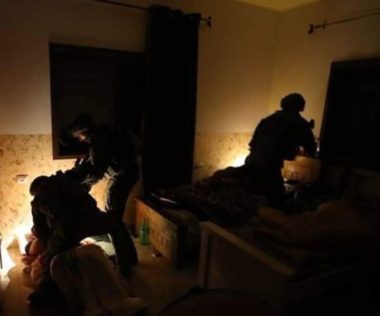 Israeli soldiers abducted, on Monday at dawn, six Palestinians from their homes in the West Bank governorates of Hebron, Bethlehem and Ramallah, in addition to attacking protesters in Bethlehem, Jenin and Ramallah.

The soldiers also invaded the home of a former political prisoner, identified as Luay Faisal Hashlamoun, 36, in Hebron city, and summoned him for interrogation.

In addition, the soldiers installed roadblocks on the main entrances of Sa’ir and Halhoul town, in addition to Hebron’s northern road in Jouret Bahlas area, and its southern road in al-Fahs area, before stopping and searching dozens of cars and interrogated many Palestinians while inspecting their ID cards.

In Bethlehem, south of occupied Jerusalem, the soldiers invaded the al-Fawaghra neighborhood, in the center of the city, searched homes and abducted Mohammad Issa Abu Omar, 24.

In al-Biereh city, near Ramallah in central West Bank, the soldiers invaded Um ash-Sharayet neighborhood, and abducted Ahmad Abu Latifa, from his home.

It is worth mentioning that the soldiers fired several live rounds, gas bombs, concussion grenades and rubber-coated steel bullets at Palestinians protesting the invasions into Doha city, west of Bethlehem, and in Jenin refugee camp, in Jenin, in northern West Bank.

Furthermore, the soldiers abducted three Palestinians; two of them from Silwan town, south of the Al-Aqsa Mosque in occupied East Jerusalem, and one from Bethlehem, south of Jerusalem.

Also at dawn, the soldiers abducted Salah ‘Aahed Abu Diak, the brother of Sami Abu Diak, who died in Israeli prisons due to various complications after Israel refused to grant him the urgently need specialized medical care.

On Sunday evening, the soldiers abducted four Palestinian children from their homes, in Jerusalem, and assaulted several residents, the Wadi Hilweh Information Center in Silwan (Silwanic) has reported.