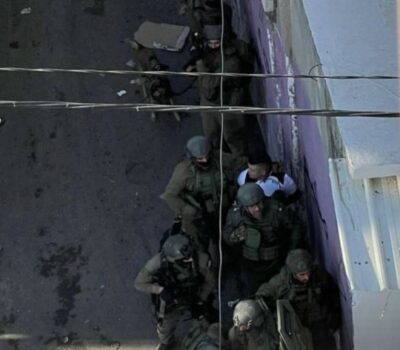 On Friday dawn, Israeli soldiers abducted two Palestinians in Jerusalem, and four in Nablus, in the occupied West Bank.

In occupied Jerusalem, many army jeeps invaded Silwan town, south of the Al-Aqsa Mosque, before the soldiers stormed and ransacked many homes.

Media sources said the soldiers abducted Mohammad Jabr Abbassi, 22, and Amin Mohammad Abbassi, 16, from their homes in the Ein Al-Louza neighborhood in Silwan.

It is worth mentioning that Nablus and its surrounding villages and towns have been subject to a strict siege and constant Israeli invasions, in addition to escalating attacks by the illegal Israeli colonizers against the Palestinians, their homes, and property.

The colonizers also fired many live rounds at Palestinian homes and burned cars and buildings.