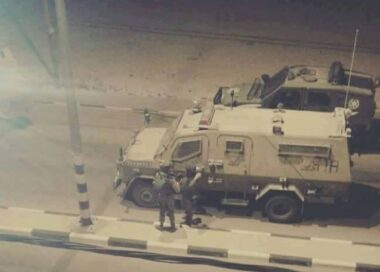 |Army Injures Many Palestinians Near Ibrahimi Mosque In Hebron|

The soldiers also abducted Mustafa Ghassan Thieb during the town’s invasion and fired many gas bombs at the Palestinians.

In Nablus, in the northern West Bank, the soldiers invaded Beit Dajan village, east of the city, and abducted four Palestinians from their car in the northeastern part of the village. Their names were unknown at the time of this report.

In related news, the soldiers abducted a Palestinian woman, Amina Ahmad Abdullah Zakarna, from Qabatia town, south of the northern West Bank city of Jenin, while visiting with her son Tareq Zakarna, a political prisoner held by Israel at the Megiddo prison.

It is worth mentioning that the army abducted overnight and Tuesday morning, at least seventeen Palestinians from several parts of the occupied West Bank overnight.